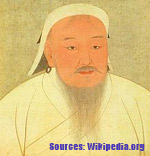 To understand and acknowledge the Asian culture in better way, a bronze sculpture of Mongolian hero Genghis Khan has bpeen unveiled in London. The 2,714 kg weight of sculpture will be helpful in disseminating the focus on the Asian Culture.

The statue, unveiled Saturday, rises to five meters from hoof to helmet, and will stand next to the iconic Marble Arch on the busy Oxford Street for six months. Against the backdrop of blue sky and green Park, it featured the leader in medieval amour lost in contemplation on horseback.

It is noted that Temujin alias Genghis Khan was born some 850 years ago and founded the Yuan Dynasty (1271-1368) in China. The Mongol empire he founded became the largest contiguous empire in history after his death.

President of the Halcyon Gallery said that London is an international city. This statue is imposing and will create dialogues from visitors, help them understand Asian culture.