Govt. restricted Hajj subsidy once in a lifetime in its new Hajj policy 2012 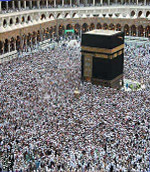 The Centre on Saturday informed to Supreme Court that it was going to restrict 'Hajj Subsidy' to once in a lifetime in its new Hajj Policy 2012 as against once in five years.

The government grants subsidy on Air India's fare to Hajj pilgrims who go to the holy city of Makkah and Madina in Saudi Arabia for performing Islam's one of the five essential duties.

Last year government granted a subsidy of Rs.38,800 on Airfare.

According to latest Hajj Policy, government has decided to grant subsidy to those who have never gone for Hajj.

According to signed agreement between India and Saudi Arabia government, later has allowed a quota of 1.70 lakh pilgrims to perform Hajj to the first.

The Hajj Committee will select only 1.25 lakh Hajj pilgrims who will get subsidy and rest 45,000 pilgrims will go from private planes.

In yet another important decision, the Hajj Policy 2012 has stated that the government would not open up registration for new Private Tour Operators (PTOs), saying, the Hajj service could not be equated to any other commercial venture.

The selection of Hajj pilgrims would be on the basis of lottery system.