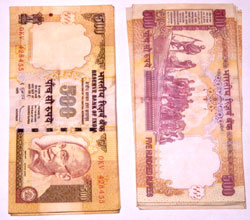 According to B.S.Jaiswal, DCP Delhi Police, these fake Indian currency notes are of very fine quality and the standard security features like water mark, security thread and paper quality used in the currency notes is of very high standard which makes it very difficult to detect these fake notes.

In the recent past there were several inputs that fake Indian currency was being pumped into Indian markets with a view to destabilize the Indian economy. The fake currency was being circulated through Indian carriers, especially the unemployed youths.