UP elections: SP gains but May not get majority 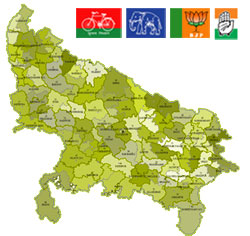 The result for UP elections points towards hung assembly with SP being single largest party. The ruling BSP seems to finish second and cycle of SP is leaving behind the elephant of BSP with a great margin. It appears that congress and BJP are closely fighting for third spot.

As per recent leads SP is slowly inching toward majority with lead on 190 seats while BSP is leading on 100 seats. BJP is fighting with congress and allies for third spot. Others are leading on 12 seats.

BJP leaders have said that they are satisfied with the verdict and are ready to sit in opposition rather than supporting any party. On the other hand, congress has said that the results are unexpected but the party is definitely in a position to influence the formation of the government in the state.

Among the political bigwigs Kalaraj Mishra and Uma Bharti of BJP and Ajam Khan of SP are leading in their constituencies while wife of Union Law Minister Salman Khurshid, Louis Khurshid is trailing.