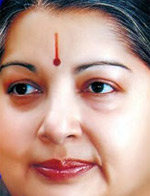 After clearing hurdles from the way of constructing much controversial 'Kudankulam' nuclear power plant, Tamil Nadu Chief Minister J Jayalalithaa on Saturday has asked to Prime Minister to allow the state to access entire power which would be generated from the two units of the proposed nuke plant.

In a letter to PM, Jayalalithaa has requested to Manmohan Singh to allocate the state to wholly generated power (2,000 MW) as against its current share of 925 MW due to severe power crisis and constraints in power transmission infrastructure.

A copy of the letter was released to media, in which she said that Tamil Nadu had requested an allocation of 1,000 MW from the Central Pool last year but only 100 MW was made available to the State.

'It will be proper and justifiable that the entire power to be generated from the Koodankulam Nuclear Power Plant is made available to Tamil Nadu."

"This is also inevitable as the transmission corridor congestion problem still continues and has also been brought to your notice," she wrote in her letter.

"I hope that this request will be positively considered by you. May I also reiterate that we require and deserve this power?" she added.