Housefull 2 will be surely be a blockbuster, says Sajid Khan 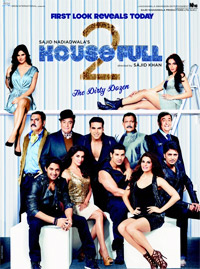 "Housefull 2" the upcoming movie of Sajid Khan as a director is all set to hit the silver screen on April 6 and Sajid says he is quite confident of the success of the movie as he makes the films by assuming him as an audience.

"Only a good film will work. If my film is not good then it will not work beyond Monday. But I can say it with a lot of confidence that this film ('Housefull 2') is a blockbuster. I am not saying this because this is my film but because I have made this film according to the audience. Every film I make, I make it as an audience," the 40-year-old said here at a promotional event for "Housefull 2" Sajid said.

According to Sajid it's the family audiences that make a film a hit.

"The day my film does not work, then no matter how many tie ups I do, it will not work at all. It will work when you people go and watch it with your family," he said.

Sajid says he don’t measure the success of his films on the basis of box office collection or reviews, but by the audiences' reaction.

"Quite honestly, success doesn't mean five star rating nor does it mean box-office collection. I think all the people on the stage have faced failure and success at some point of time in their career” Sajid added.

"I think the most important thing in life is getting the love and acceptance of the audience. It does not always come with success. It comes with the connection of the big screen and the audience. For me, that connection is important even if I am behind the camera. So that is success for me and not reviews, awards and collections," he added.