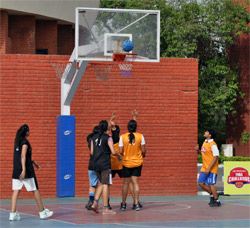 The third season of the Mahindra NBA Challenge entered into its 2nd days and audience observed interesting matches at the Modern School ground at Barahkhambha Road New Delhi. Season three of the tournament is taking in five cities of the country.

It is noted that the tournament has been divided in many subgroups like five city league features eight divisions total for males and females. Sub juniors for ages 12to 13, Youth for ages 14 to 16, junior for ages 16 to 18 and adults ages 19 over.