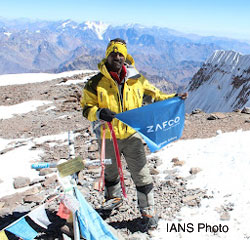 An Indian has made a history when he scaled the tallest peaks of the Nades in South America. Thirty-seven-year old Malli Masstan Babu who comes from a farming family in Nellore in Andhra Pradesh, has got the credit to be the first Indian to do so. He holds a Guinness record for having climbed the seven summits of the world in just 172 days.

Babu has credited with scaling the Aconcagua in the Argentine side three times. At 6,962 metres, it is the tallest peak outside the Himalayas. It is noted that he has already climbed the Huascaran (6,768 metres) in Peru, Sajama (6,542 metres) in Bolivia, Chimborazo (6,310 metres) in Ecuador and Ojos Del Salado (6,800 metres) in Chile.

Mastan Babu also holds a Guinness record for climbing seven summits in 172 days in 2006. This included the Vinson Massif peak (4,887 metres) in Antarctica. This challenge was tougher for him due to the extreme cold but he done this.

His success is something special because no Indian has ever been to most of the places where he has gone.

R. Viswanathan, India's ambassador to Argentina, Uruguay and Paraguay, said that Babu has spent about nine months in South America in his four trips since 2005.

A student of prestigious IIM Kolkatta, Babu has done his Mtech from IIT Kharagpur. He has given lectures on leadership at companies like GE, Intel, John Deere, and in management schools in the US, UAE, Kenya and India.

(With Inputs from IANS)