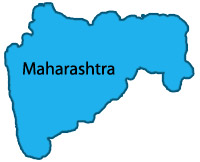 In a major ghastly naxals attack in Maharashtra, 10 CRPF troopers have been killed in a landmine blast. CRPF troopers were travelling in a bus and were on an operation when targeted by Naxals in the Dhanora area of Gadhchiroli district of Maharashtra.

According to sources incident occurred deep in jungle, which is 50 km from the Gadchiroli district headquarters. Bus was full of CRPF troopers and was on the way to its destination when a mine blast triggered by Maoist, which blew up the vehicle. Details of the incident is still be awaited. It has been said that at least 10 troopers have been killed in the ghastly attack but the casualty figure could go. 9 other troopers have been injured in the blast and death toll is likely to be rise because bus was full of CRPF troopers during incidents.

After the incident the injured are being rushed to nearest hospitals and seriously injured has been shifted to Nagpur.

Top officials and civil officials have left for the scene of the incident and further details are awaited.