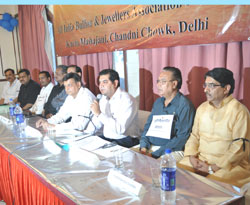 The Bullions Merchants Association has threatened to protest on Vikash Marg in East against the govt. non-cooperation to the jewellery sector. Association has alleged that govt. has not paid any attention to our demands and due to this entire sector is suffering a lot. Association has announced in a press conference held in Delhi.

Ramesh Narang, spokesperson of The Bullions Merchants Association said that central excise duty is a detailed law and needs elaborate bookkeeping. The costs and details to be maintained are cumbersome. Ordinary jewellers will be subject to great hardship as they are owner managed and small businesses doing less than Rs. 1 cr to 5 cr. business annually. He said that due to govt partial policy small jewellers are facing lot of problem.
Govt.should change the symbol policy as small-scale jewellers have nothing to do and they are on the verge of finish before the branded and big fishes.

Krishan Goel president of The Bullions Merchants Association said that govt. has introduced additional customs duty @2 percent this makes total customs duty already prevailing and new levy to 4 percent. He said that this makes gold cost in India 6 percent more than international gold price. Certainly this will encourage smuggling of gold. On one hand govt. wants to abolish hawala transactions and anti money laundering and black money on other hand with this increase of duty smuggling will be rampant.

East Delhi Jewellery Welfare Association president Ashok seth said that organise will organise a protest on Vikas Marg against the govt policy. Om Prakash, Ghanshyam Gupta, Yogesh Singhal, Vimal Goel, Vijay Khanna and Preem Prakash Sharma were among those who were present on the occasion.