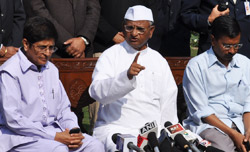 Team Anna has been given conditional permission by Delhi Police to protest against alleged killings of various honest men and officers by organized mafia or in terror attacks.

A legal undertaking has been taken from team Anna in this regard, says. Seju Kuruvilla, Additional Deputy Commissioner of Police

"The organisers have confirmed the presence of the father of IPS officer Narendra Kumar who was killed in Morena district of Madhya Pradesh while intercepting a tractor-trolley carrying illegally-mined stones," he said.

He also added that the Indian Oil Corporation officer Manjunath Shanmugam, who was shot dead in Lakhimpur Kheri while trying to stop sale of adulterated oil, is also likely to be present at the site of protest Jantar Mantar on Sunday.

Kuruvilla also said that Team Anna has communicated him about the presence of around 40 such families at Jantar Mantar whose kin were either killed by mafia or during terror attacks.

"We have told them that the crowd should not be more than 1,000 people. Around 10 metal detectors will be placed at three entry points with 1,000 police personnel to avoid any untoward incident," the police officer said.