Low fat hormone can predict the risk of asthma in women, especially smokers 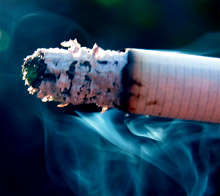 A scientist from Indian origin has revealed that women having low serum levels of adiponectin, a protein hormone that is produced by the adipose tissue of the body, are more susceptible to develop asthma in the future, particularly if they are smokers.

The findings of the study has been described by the lead author of the paper Akshay Sood, MD, MPH, associate professor in the Division of Pulmonary and Critical Care Medicine at the University Of New Mexico Health Sciences Center School Of Medicine.

"Adiposity is known to be related to asthma. Although a causal link between adiponectin (a protein produced by adipose tissue) and asthma has been demonstrated in mice, the evidence in humans has been conflicting," said Sood.

"In an earlier cross-sectional study, we found an association between low serum adiponectin levels and prevalent asthma among women, but the direction of this association is not known," Dr. Sood added.

"In the current study, we examined the longitudinal association between asthma and adiponectin and found that low serum adiponectin concentrations, independent of obesity, predicted a higher risk for developing asthma," he stated.

The research was done on the basis of analysis of 1,450 women that included 1,011 pre-menopausal women from the 10, 15, and 20 year examinations of the Coronary Artery Risk Development in Young Adults (CARDIA) study.

The researchers found that, being in the lowest level of serum adiponectin concentrations I.e. 7 mg/L at year 15 was found to be a significant indicator for higher risk of asthma at year 20, especially among current smokers.

The study had several limitations, as the use of self-report for asthma diagnoses and the possibility that using only Coronary Artery Risk Development in Young Adults (CARDIA) patients who had serum adiponectin measured may have biasness of selection.

"Our results show that low serum adiponectin levels in middle-aged women are associated with an elevated risk of developing asthma in the future," stated Dr. Sood.

"This suggests that raising systemic adiponectin concentrations could potentially be useful as an asthma prevention measure in women, particularly those that smoke," he concluded.

The details of findings were first published and then in print publication in the American Thoracic Society's American Journal of Respiratory and Critical Care Medicine.

-with inputs from ANI.