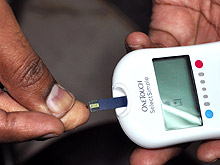 In a recent study, Scientists found that a specialized cellular stress takes place in pancreatic beta cells before the inception of type 1 diabetes.

In type 1 diabetes (T1D), pancreatic beta cells die due to an autoimmune attack, but there is still uncertainty behind the actual reason for this.

A group of scientist funded by JDRF from the Indiana University School of Medicine believes that the stress response in the beta cell may help to stimulate the autoimmune attack that ultimately leads to Type-1 Diabetes.

The findings of the study has revealed entirely new reason behind how changes in the beta cell may play a major role during the initial stages of T1D, and has provided new insights to the understanding of reason of T1D progress, its prevention and treatment.

The study was carried by a group of researchers headed Sarah Tersey, Ph.D., assistant research professor of pediatrics, and Raghavendra Mirmira, M.D., Ph.D., professor of pediatrics and medicine at the Indiana University School of Medicine. The study was first demonstrated in a mouse model of T1D in the first phase and it was seen that that beta cells become stressed early in the disease process, before the mouse incepted diabetes.

It was seen that the beta cells develop a cell death pathway that ultimately leads to the loss of beta cell mass in the mouse in response to the stress.

In every cell of the body there is a specific compartment called the endoplasmic reticulum (ER) which is responsible for production and processing of the proteins, like insulin, before being released by the cell.
Pancreatic beta cells are highly responsible for the production and secretion of insulin in the body and this is the reason, ER plays an important role in their function, and thus makes the sensitive to ER stress.

The study by Tersey and colleagues revealed that any metamorphosis of the beta cell ER stress response is seen in the early stages of the disease, and if the ER stress is not resolved properly, it can result in defects in insulin secretion, and this can ultimately lead to the death of the beta cell.

"The ER stress in the beta cell has been implicated in type 2 diabetes, but its role in triggering beta cell dysfunction in type 1 diabetes has not been clear until now, which is why these findings are exciting, " said Dr. Mirmira.

"Although the paper does not directly address a potential role for ER stress in the development of human T1D, what we observed in the mice is consistent with clinical observations of type 1 diabetes in people where defects in insulin secretion precede overt diabetes," he stated.

Andrew Rakeman, Ph.D. Senior Scientist of Regeneration for JDRF stated, "We need to look more closely at beta cells and their role in type-1 diabetes because they may be participating in their own demise."
"This study shows that beta cell stress is occurring at the earliest stages of the disease process, raising the intriguing possibility that beta cell stress could be part of the trigger for the autoimmune process that leads to type 1 diabetes.

"This is exciting because it not only teaches us something about the early events in T1D progression, but suggests that drugs or therapeutic strategies that alleviate ER stress might be used to delay progress of the disease, either preventing insulin dependence or preserving beta cell function, improving glucose control and reducing the risk of complications," Rakeman noted.

The details of the findings were recently published in the journal Diabetes.