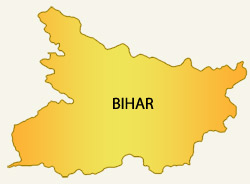 Maoist has blown up a bridge and an office in Jamui district of Bihar during two-day strike to protest the arrest of top Maoist leaders. Maoists reportedly attacked the Khaira block office in Jamui and also destroyed the same. Before escaping from the place they warned the local administration to stop combing operations against them.

According to sources, about 100-armed Maoist targeted the Khaira block office in Jamui, which is about 300 KM from Patna. Maoist used dynamite to destroy the block office and also destroyed the paddy crops in the vicinity. In another incidents six trucks were burnt in a separate incident. Apart from these they targeted a bridge and destroy this.

It is reported that before escaping from the vicinity Maoist has threatened the local administration to stop combing operations against them via posters.

Earlier in the week, a railway track was blown up, while two mobile phone towers, a tractor and four vehicles were torched in Jamui and Banka districts.
It is noted that Maoist have been opposing the arresting of their top leaders and for this have organised two-day strike.