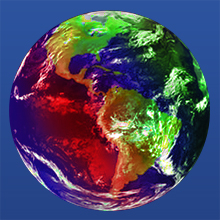 Today when science and technology has made enormous development and the world is moving towards globalization and industrialization very fast, one of the major concerns that cannot be neglected is the frequent climate change across the world. Dominated by human influences, climate change has now exceeded the boundaries of natural variability. The major reason behind the global climate change is the human-induced changes in atmospheric composition through emissions associated with energy use, but on local and regional scales, urbanization and land use changes are also important.

Climate change has resulted in some catastrophic concerns such as global warming, global dimming, Sea level is rising, melting of Glaciers and permafrost, Sea-surface temperatures warming, change in ecosystem and much more. Climate change will have wide-ranging effects on the environment, and on socio-economic and related sectors, including water resources, agriculture and food security, human health, terrestrial ecosystems and biodiversity and coastal zones. Changes in rainfall pattern are likely to lead to severe water shortages and flooding. Melting of glaciers can cause flooding and soil erosion. Rising temperatures will cause shifts in crop growing seasons, which affects food security, and changes in the distribution of disease vectors putting more people at risk from diseases such as malaria and dengue fever. Temperature increases will potentially severely increase rates of extinction for many habitats and species (up to 30 per cent with a 2° C rise in temperature).

Therefore, it is very important to work on the major causes of climate change to reduce the risk of such problems in future. A proper planning for climate change should be made that should involve consideration of climate related risks including such as changes in temperature and precipitation leading to agricultural losses and drought and biodiversity losses, and those which are very sudden such as tropical storms and floods. It is now recognized that climate related risks are happening in a continuation and the past and current experiences in dealing with climate variability can provide us many valuable information for reducing vulnerability and enhancing possibility to reduce future climate related adverse impacts.

Although there has been much progress in monitoring and understanding the climate change, there remain many scientific, technical, and institutional impediments to precisely planning for, adapting to, and mitigating the effects of climate change. There is still a lot of uncertainties related to the rates of change that can be expected, but it is very clear that these changes will be increasingly to problems, such as changes in extremes of temperature and precipitation, decreases in seasonal and perennial snow and ice extent, and sea level rise. Anthropogenic climate change is now likely to continue for many centuries. We are intruding into an unknown fact with climate, and its associated impacts could be quite devastating.