Arogya Utsav: A step towards the golden glory of Ayurveda 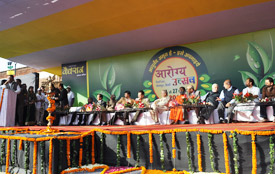 Today when we have imbibed Allopath and other treatment ways for our all ailments, Ayurveda has once again on the way of achieving its ancient glory. Now people have realized the basic facts that Ayurveda has tremendous resources for the welfare of mankind. To provide the due glory of ancient Ayurveda, the Arogya Utsav fair has been started in Delhi Haat at Pitampura in New Delhi. During the fair, noted and famous personalities related to Ayurveda have been gathered here to light the lamp of Ayurveda among the people.

On the inauguration day of the Arogya Utsav, famous personalities from the rest part of the country highlighted the facts that why today Ayurveda has become a need of modern life? Various vaidya tried to convince people regarding the various misconceptions among the people about the Ayurveda. According to them, Ayurveda is not just a way for treatment for disease rather it has the link between heart to spirituality.

Talking to the media persons, Vaidya Satyaveer said that human life is precious and it must be keep healthy so that we can discharge our duties fairly. Today the changed lifestyle of the people has invited most of the diseases for them. According to him, “the changed and irregular lifestyle is the root cause for all the disease among the people.” Talking to the media persons, Satyaveer told that there is a misconception that Ayurveda has not the ability to cure the major disease. In fact Ayurveda give us the key guidelines which are essential for a healthy body and mind. It has been said that a healthy body consists a healthy mind and Ayurveda helps us to remain healthy for a better family, society and for the welfare of the mankind. Differentiating Ayurveda from the other ways of treatments, he said that when other treatment just tries to kill the pain in your body, Ayurveda insists on the fact that why that very pain occurred in a body. Ayurveda believes that only killing the pain is not enough rather it must be vanished from its root. And that is why Ayurveda treatment took more time than other way of curing. He insisted that the golden glory of Ayurveda is likely to come and coming days is bright for the betterment of Ayurveda.

Founder chairman of the Indraprastha Ayurvedic Yunani Aushadhi Vyapar Mandal Samiti, Jayanti Bhai Parikh said that Ayurveda is a science of life which provides us a way for better and healthy life. He said the holistic concept of health defined by Ayurveda has now been witnessed by people and it is a milestone for the welfare of Ayurveda in future.

On the occasion Mr. Santosh Mehra said that Indraprastha Ayurvedic Yunani Aushadhi Vyapar Mandal Samiti has done a lot for the welfare of Ayurveda and its propagation. Organising such an Arogya Utsav is one of them, which will provide a platform for the welfare of the Ayurveda and people too. Talking about the welfare of Ayurveda among the people, he said that the celebration of Dhanvantari jayanti is one of the steps, which organized by the Vyapar Mandal. There is a need for the coordination between consumers, shopkeepers and concerned persons for the proper propagation of the Ayurveda.