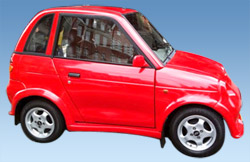 Those worrying about charging their electric cars while on move may soon get relief. A team of engineers that includes one of Indian origin has invented a wireless power system that could charge electric cars, while you are driving them.

A team of Stanford researchers, including associate professor Shanhui Fan, postdocs Xiaofang Yu and Sunil Sandhu has suggested to embed metal coils several feet apart in a stretch of highway and outfit an EV with its own coil. And when you drive down your electric car on the road the embedded coils would wirelessly recharge the battery of your car.

The phenomenon called magnetic resonance coupling works like a secret message: When copper coils are tuned to resonate at the same frequency, one coil that's hooked up to an electric current can pass it to the other coil via a exclusive magnetic field.

The transfer needs special tuning so anything that is not tuned the same way including humans will remain unaffected, says a report of Discovery News.

Five years before, a team at MIT lit a 60-watt lightbulb using the same phenomenon of magnetic resonance and a spinoff from the Institute called WiTricity designed power mats that wirelessly recharge devices this way. MIT physicists also revealed that the efficient power transfer is safe for humans and animals.

Fan and his colleagues used computer models to come up with a coil array that is able to transfer 10 kilowatts to an EV. They found that coils bent at 90 degrees, each with a metal plate, spaced 6.5 feet apart can get the task done. The team has applied for a patent for this discovery.

Further, this team of electrical engineers plans to test the unit using computer simulations in the lab so that they can design a real prototype to ensure the system works according to expectations.

Applied Physics Letters, a journal has published this study.