New molecule could offer relief to allergies and asthma patients 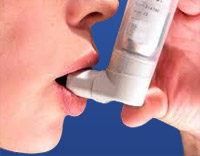 Those suffering from allergy and asthma can hope some relief in the near future. Scientists have discovered a new molecule, which seems to play a deterrent to the body's allergic response to house dust mite.

This discovery made at The University of Nottingham reflects on how the body's immune system identifies and responds to allergens. This discovery could pave the way for developing new therapies or treatments for allergies people.

The molecule DC-SIGN was discovered by a team of immunologists headed by Dr Amir Ghaem-Maghami and Professor Farouk Shakib of the University's School of Molecular Medical Sciences. This molecule can be found on the surface of the immune cells, which play a key role in the identifying a major allergen from house dust mites called Der p 1, which is the prime cause of asthma in northern Europe.

"There has been a sharp increase in the prevalence of allergies over the past few decades and allergic asthma among children has reached epidemic proportions in many industrialised countries, including the UK," Dr Amir Ghaem-Maghami was quoted as saying.


"Despite improvements in patient care, mortality and morbidity of allergic asthma has remained high, and most therapies target symptoms rather than curing the condition.

"A better understanding of how the interaction between allergens and the immune system triggers allergy is vital if we are to develop more effective and efficient treatments for this debilitating condition," Dr Amir Ghaem-Maghami stated.

Allergy is body's immune system’s reaction to harmless substances available in the atmosphere. These substances are called allergens. Body’s immune system misreads it as an attack and produces an antibody called IgE. This antibody eventually leads to the release of further chemicals (including histamine) by certain immune cells, which together cause an inflammation and common symptoms of allergy that includes itchy eyes, sneezing, runny nose and wheezing.

This study was focused on the role of DC-SIGN, a receptor found on the surface of antigen presenting cells, these cells are first in the immune system to come into contact with allergens.

The researchers found that DC-SIGN binds to major allergen from house dust mite (Der p 1) and dogs (Can f 1) and appears to play a regulatory role in the allergic response when exposed to house dust mite. The binding of allergen to DC-SIGN on antigen presenting cells appears to facilitate a mechanism that could reduce harmful immune responses to allergens.

This is contrary to the role of another allergen reception - the mannose receptor - previously discovered by the Nottingham group.

The research shows that DC-SIGN could potentially play a beneficial role in controlling immune responses to atmospheric allergens.

The Journal of Biological Chemistry has published this study in its current week edition.