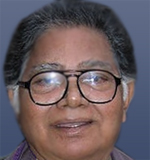 Gangopadhyay, who is highly acclaimed and known for his poems and novels, the Sahitya Akademi winner will now survive by his wife and a son living in the US. He died at his south Kolkata residence.

Gangopadhyay's dead body has been kept at a mortuary and waitig for his son to perform thelast rites.

Gangopadhyay has written over 200 books over six decades since he wrote his first poem 'Ekti Chithi' (A letter) that was published in the 1950s, Gangopadhyay created a niche for himself in the Bengali literary scene and gain a respectable position as an author.