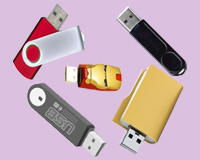 An easy-to-carry storage device, Pen drives are responsible for over 70 per cent of security breaches and are a major threat in defense forces, the Army officials said.

"These pen drives, which are mostly manufactured in China, have emerged as a big threat to our cyber security systems," they said.

Army headquarters are tightening their cyber security to protect themselves from such breaches and hacker attacks. They have issued new cyber security guidelines for the same.

IAF has instructed officials to not have any official data on their personal computers and pen drives. They have to declare their Information Technology assets as well.

Strict disciplinary action including court martial can be taken against the personnel found violating these instructions.

Officials use pen drive to store official data for use at their personal computers but from there, it is transmitted from their IP addresses to hackers from the 'malware' present in the pen drives.

About a couple of years ago, system of a Major posted in Andaman and Nicobar Islands was hacked and spying viruses transferred the information to other computers

National Security Council has also been discussing designating certain intelligence agencies under the Defense Ministry for countering cyber attacks against the country.