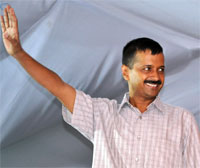 Anti-corruption activist Arvind Kejriwal will announce the formation of a political party formally on Tuesday, days after splitting with Anna Hazare.

"The formal launch of the party will be tomorrow (Tuesday) morning. The announcement will be made at a function at the Constitution Club in New Delhi," Aswathi Muralidharan, India Against Corruption media coordinator, told IANS.

Kejriwal, an active IAC leader, will also disclose the vision of the party and its constitution at the launch, she said.

Kejriwal met Anna Hazare in Delhi on Monday for the first time since their split and said though, their path are different but the objective is still same.

"Anna is in Delhi, so I naturally had to meet him. Our ways are different, but our destination is the same. I have told Anna that I will support him in all his movements," Kejriwal told reporters after the meeting.

Kejriwal blamed the media for manipulating the matters between him and Hazare wrongly.

"There is no fight. Our relationship and communication will continue, we will keep meeting," he said.

Kejriwal confirmed Anna will not join his political party.

"He has already said that he will not be part of it as he thinks politics is not the right direction," Kejriwal said.

The party will also announce the name of an internal Lokpal, a retired judge to curb cases of impropriety.

Anna Hazare on Sunady arrived the capital to meet his supporters to plan for the future course of action in his campaign against corruption.

Hazare is against the movement turning political and parted with Kejriwal owing the same and has also banned them to use his name or photograph by any political outfit.