One glass of milk everyday could boost mental functions 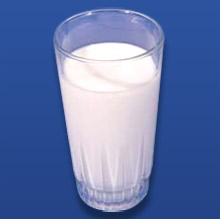 New Delhi, Jan 31: Taking one glass of milk everyday can improve your brain and mental performance besides supplementing the key nutrients required by the body, says a study.

As per findings of a new study the adults taking milk and milk products in high quantities performed significantly better in memory and other brain function tests than those who took very little or no milk.

The chances of failing this test were five times less in Milk drinkers than non-milk drinkers.

To come to this conclusion, researchers at the University of Maine carried out this test on over 900 men and women ages 23 to 98 and put them through a series of brain tests - including visual-spatial, verbal and working memory tests - and tracked the milk drinking habits of these participants.

There mental performances were counted on eight different measures, irrespective of age and through all tests, those with habit of taking one glass of milk daily fared better.

The highest scorers for all eight tests were those with the highest intakes of milk and milk products and not those who have low and infrequent in their milk habits.

Besides several health benefits of milk from bone to cardiovascular health, the potential to keep away mental decline is a novel benefit that impact the aging population. Though more research is required, yet the scientists suggest some of milk's nutrients may have a good effect on brain function and that "easily implemented lifestyle changes that individuals can make present an opportunity to slow or prevent neuropsychological dysfunction."

Milk is very beneficial for health. It is good for every one.

Cow milk is much more beneficial.

These benefits are already known to the Indian's. Everything is already documented in Ayurvedic books.

You can live without taking Harmful Allopethic medicines. You can keep yourself healthy by following proper Ayurvedic health practices.

There are many people looking for the medicines for increase the immunity power, but there is not good medicine in Allopath. They are just selling medicines just to earn huge money. But you can use Ayurvedic medicines to increase your immunity power.

Let's know your email address if you need any kind of help related to your health.