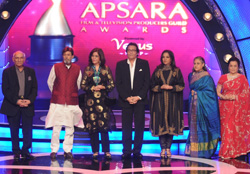 Zindagi Na Milegi Dobara (ZNMD), the movie based on the story of three young bachelors who wanted to enjoy the adventurous life before getting married, won the six trophies at 7th Apsara Film & Television Producers Guild Award, usually known as Apsara Award in Mumbai on Wednesday.

The glittering, star-shimmering event held at Mumbai's plush Yashraj Studios in which ZNMD won the top honour of Best Film Award. Rithesh Sidhwani and Farhan Akhtar grabbed award for the movie. Excel Entertainment had produced it.

Youth Icon and Rockstar Ranbir Kapoor won the Best Actor award for his glittering performance in 'Rockstar'. This is the third time he grabbed this award.

Expressing his feeling, Ranbir said, "I'm very happy that I got the award for it. I express my deepest gratitude to the Guild for giving me this honour, it is very special to me."

Commenting upon his performance in 2011's one of the most successful movie, Bollywood youth icon said, "I don't feel humbled because I worked really hard for this role."

Another younger Zoya Akhtar, the director of ZNMD and the daughter of Javed Akhtar won the three awards including the top honour of Best Director for her movie Zindagi Na Milegi Dobara.

The other two awards Zoya won with Reema Kagti were Best Screenplay award and Best Story Award for ZNMD.