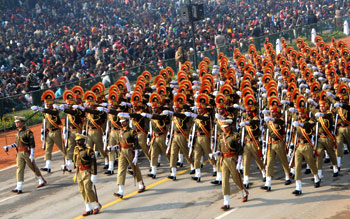 The Republic of India is joyfully celebrating its 63rd Republic Day, marking the 62nd anniversary of being a complete republic nation on 26th January 1950.

The celebration began in the capital around 10 a.m. when Prime Minister Manmohan Singh laid a floral wreath at the Amar Jawan Jyoti to pay tribute to unknown soldiers who laid down their lives for defending the nation. Union Defence Minister A K Antony and chiefs of Army, Navy and Air Force followed the PM.

After ending the tricolor unfurling episode, 21-guns saluted and MI-17 helicopters scattered the rose petals in the sky.

Thailand's first woman Prime Minister Yinluck Shinawatra was the guest of honour at this moment.

The Indian Navy's contingents was led by Lt Commander Manikandan K and the Air Force contingent by Flight Lieutenant Sneha Shekhawat - the first woman ever to lead an IAF contingent at the Republic Day parade.

The 19 children out of 24 national gallantry award winners for 2011 was one amongst the prime attractions of the parade.

The soldiers of Indian armed forces demonstrated various acrobatically show in the parade and won the attraction of the public.

The tableaux from 23 states and central ministries displaying the varied historical, architectural and cultural heritage of the country were also the part of the parade.

The Republic Day celebration is also going on other parts of the country and head of the states have unfurled the tricolour at the scheduled venues. The Non-Resident Indians (NRIs) were also celebrating the Republic day festival in their respective countries.