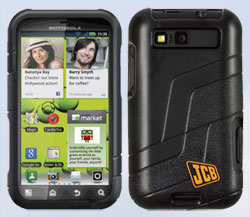 Introduced at the end of last year, Motorola DEFY + has made a firm foothold in the market due to its much-liked features. Now, the Digger manufacturer JCB has launched its own version of Motorola's Defy+ mobile phone.

Whilst most of the features of this new Defy are more or less same as the previous version's, the processor in this new version is slightly better. The TI OMAP 3620 processor comes at a speed of 1GHz, which has replaced the OMAP 3610 800MHz, which was found in the original, and an updated OS

Other features and specifications of this Motorola's Defy+ mobile phone handset are:

Memory: Expandable up to 32 GB

Talk time: Up to 7 hours