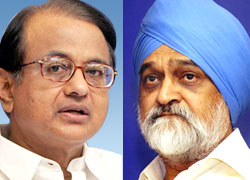 The halted UIDAI project is likely to catch its speed since now, as Home Minister P Chidambaram and Planning Commission Deputy Chairman Montek Singh Ahluwalia Monday rejected the media reports about the emerged turf war between the home ministry and Unique Identification Authority of India (UIDAI).

UIDAI is a Planning Commission's ambit and Nandan Nilekani, co-founder and former president of Infosys Inc. is the project head. UIDAI is the largest biometric project in the world, designed for generating Unique Identity (UID) Cards to every Indian citizen containing the biometric data (fingerprints of all 10 fingers, and images of iris) of any individual.

There were some reports in media two months before that Home Ministry has raised eyebrow over the security lapses of the biometric data of all residents and process of issuing UID card without conducting proper verification of any individual and asked to halt the project until the consensus were made.

The similar project is going on from the side of Home Ministry, known as National Population Register (NPR) in which smart cards are being issued to the Indian citizens.

Ruling out the media reports, Chidambaram said, "There were some media reports about conflict between the Home Ministry and the UIDAI, but they are not true."

Chidambaram said this on Monday while launching the distribution of smart cards under NPR for coastal villages in Tamil Nadu at Pattipulum village, near Mamallapuram, about 80 km from Chennai.

He also added that the government was mulling to incorporate Aadhar numbers in the future resident Identity cards of the NPR.

Aadhar was a unique number while the smart card being issued under NPR would have comprehensive details.

On the other hand, Montek Singh Ahluwalia stated that it would not matter small overlap goes on between UIDAI's Aadhar project and NPR.

UIDAI has dispelled the fears of security breaches in data and assured the government about the reliability, feasibility and scalability of the technologies being used in UIDAI project.

In a statement, UIDAI said, "Based on the analysis, the UIDAI confirms that the enrollment system has proven to be reliable, accurate and scalable to meet the nation's need of providing unique Aadhaar numbers to the entire population."