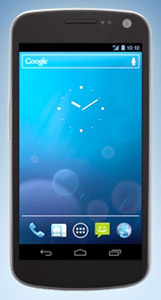 Samsung claims that Samsung Galaxy Nexus Telus is the world's first smartphone, which will be running on Android v4.0 operating system. It will have Android's latest Ice Cream Sandwich 4.0.1 operating system, which is upgradeable to 4.0.3. Samsung has put in all efforts to make it a powerful phone. In order to make this work, it has attached a dual-core TI OMAP 4460 1.2-GHz Cortex-A9 processor in it. It also has a 307 MHz VR SGX540 GPU (Graphics Processing Unit), which makes the display and gaming experience better.

With a dimension of 123.9 x 63 x 10.8 mm, Samsung Galaxy Nexus Telus is more like a mini tablet that weighs 135 g. Nexus Telus has a super AMOLED capacitive touch screen with the multi-touch facility. The 4.65-inch screen has 16M colours. An Oleophobic coating protects the display.

Though the Samsung Galaxy Nexus Telus does not support any external card slot, it does have an internal 16 GB of storage and also comes with 1 GB RAM. The rear camera of the Samsung Galaxy Nexus Telus can record video at 1080p (1920 × 1080 @ 24 fps) while the back camera can record the video at 720p@30fps. The 5 MP rear camera comes with an auto focus, zero shutter lag and single LED flashlight and having the facility of touch focus, geo-tagging, face detection video. On the other hand the front camera is a 1.3 MP, which is quite good for video calling and chat.

It has a micro USB v2.0 port and a 3.5 mm audio jack. It is GPS enabled. Sensors like accelerometer, 3-axis gyroscope, barometer, digital compass and proximity sensor are included in the package. Standard Li-Ion 1750 mAh battery gives it a stand by of up to 600 h and a talk time of up to 9 h.

Samsung Galaxy Nexus Telus is available in market with a price range of 799.99 USD.