Wikipedia blacks out for 24 hours 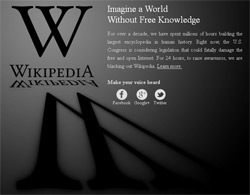 Popularly known as an Internet encyclopaedia, The Wikipedia community has blacked out the English version of Wikipedia for 24 hours, from midnight to midnight on January 18th. This blacking out is a mark of protest by the Wikipedia community against the legislation being proposed by the U.S. Congress — the Stop Online Piracy Act (SOPA) in the U.S. House of Representatives, and the PROTECT IP Act (PIPA) in the U.S. Senate.
Wikipedia’s founder and CEO, Jimmy Wales gave some press interviews regarding the Wikipedia blackout and has even started a hashtag for the topic on Twitter, #WikipediaBlackout.

The purpose of the blackout is to raise awareness that what SOPA and PIPA is all about-- and to persuade readers to stand against these legislations. Wikipedia states that “ This legislation, if passed, will harm the free and open Internet. If you are in the United States, let your congressional representative know what you think of the proposed legislation by clicking here”.

Wikipedia community fears that these legislations will hamper free and open Internet. To many restrictions on the content of websites, regarding copyright issues would put a lot of burden on website owners. On Wikipedia’s page, they have stated, ” SOPA and PIPA put the burden on website owners to police user-contributed material and call for the unnecessary blocking of entire sites. Small sites won't have sufficient resources to defend themselves. Big media companies may seek to cut off funding sources for their foreign competitors, even if copyright isn't being infringed. Foreign sites will be blacklisted, which means they won't show up in major search engines. SOPA and PIPA build a framework for future restrictions and suppression”.