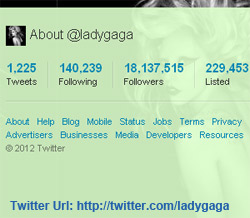 Having made waves all around the world with her singing talent, Lady Gaga has just dethroned Justin Bieber as the new Twitter ‘Queen’. No, we are not really talking about any Social Media titles here, Lady Gaga has just beat the record for having the highest number of followers on Twitter. She has amassed a whopping 18 million followers and the list is only expected to grow further.

While the figure does sound alarming, the fact that she has so many fan followers, is hardly a surprise. Lady Gaga has been a revelation from the time she stepped into the music world and has mesmerised people from all corners of the globe. Not only her captivating voice, but also the depth of the lyrics of her song has struck many chords.

Lady Gaga made her debut with the music album The Fame(2008). The songs of the album were absolute smash hits and ruled the charts for weeks to come. Along with the commercial success, The Fame got thumbs up from most of the critics. Two of its songs, “Just Dance” and “Poker Face” are still revered today.

Catching on the success of her first album, she released her second album The Fame Monster, which only reaffirmed her status as the latest pop sensation. This album made way to her eighteen month long tour, Monster Ball Tour. The tour was a resounding success and ranked among the highest-grossing concert tours of all time. Lady Gaga’s musical genius has won her five Grammy Awards and thirteen MTV Video Music Awards. She also has four Guinness World Records to her name. Sigh! What more can an artist achieve!

Lady Gaga considers pop legends like Madonna and Queen as her idols. However, music is not all that has given Lady Gaga the fame she enjoys today. She is also known for her chic sense of fashion. Its common to see Lady Gaga’s pictures splashed on Page 3 of newspapers in flashy, unique and imitable attires.