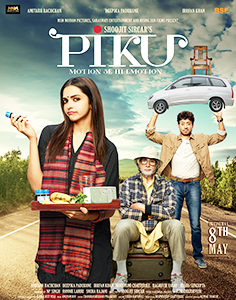 Mumbai, March 25, 2015: Have you ever seen a poster that's made you laugh suddenly and left you wondering at the sheer quirkiness on display? Well, we bet our money on Piku's two posters that have just been released by the makers.

A casting coup that brings together Amitabh Bachchan, Deepika Padukone, Irrfan Khan together for the first time, Piku is a clean family entertainer and the posters tell us exactly that!

What's equally exciting is that both the posters seem to have a story interwoven between the 3 actors.While in one poster, Amitabh Bachchan is standing on a chair that has a very peculiar hole with Irrfan Khan trying to balance him or bring him down, in the other one, Bachchan is seen sitting stop his luggage on a road and Irrfan holding a car above his head with a chair placed on top of that!

And then there is Deepika Padukone whose expressions in both the posters seem like a reaction to what Amitabh and Irrfan are doing! While in one creative, she has an expression of boredom holding a plate of medicines, in the second one she is looking straight into your eyes, with a I- know -it- all-about- this- family expression! We must add here that Deepika is looking absolutely stunning.

This glimpse into the world of 'Piku' really leaves us wondering what is brewing between these three! We can't wait to catch a glimpse of this family comedy drama and join the madness. The trailer will be launched at an event in Mumbai and will be followed by a roadblock on Sony Network at 9 PM on 25th March, 2015.