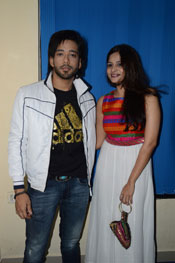 Like Salim Khan's son Salman Khan and Javed Akhtar's son Farhan Akhtar chose to be actors, Iqbal Durrani, who had written the dialogues for Kuku Kohli's Phool Aur Kaante, which marked the debut of Ajay Devgn as an actor, besides directing films like Hindustan is now all set to introduce his son Mashaal Durrani as an actor by staging his comeback as a director after a long period of hiatus, with Hum Tum Dushman Dushman.

The film will introduce Sohini Pal, the pretty daughter of the actor turned politician Tapas Pal, who had played the romantic lead opposite Madhuri Dixit in Madhuri's debut film in Hindi- Rajshri's Abodh. Mukesh Rishi will play a very important role as a&nbs p;dreaded terrorist with a heart of gold in this film.

Says Iqbal Durrani, the proud father of Mashaal."My son Mashaal and Mukesh play two main roles in the film. While my son plays a young army officer, Mukesh plays a terrorist who finds himself in a trench in the same No Man's Land. It is about how the two opposite poles come to terms with each other because of the circumstances in which they find themselves in when a seven year old kid is also thrown in the same trench." Iqbal has shot his film in a period of 45 days in Jammu, Jammu border and Patni Top and is readying his film for an early release, deception- by masters and how he manages to come out of the trap forms the crux of the story".