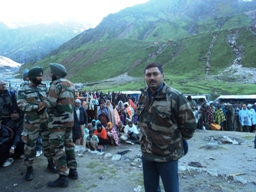 After Hindu shrines Badrinath and Kedarnath which was affected most by the recent torrential rains, flash floods and landslides in Uttrakhand, Shikh Shrine Hemkunt Sahib, located on the Badrinath route at an altitude of 15,200 feet in Uttarakhand, was also closed temporarily on late Wednesday night due to badly damaged road links.

The holy Sikh shrine will remain closed until further announcement.

But, according to sources, there is a strong chance that it may close for the entire season as the connecting road from Tayya bridge to the shrine was badly broken at various places and it seems that it will take long period to resume it as before occurring the flood situation.

"The road from the Tayya bridge leading to Hemkunt Sahib is broken at many places owing to heavy rains. Hence we decided to shut the shrine for some time," a state government official said.

He added that the gurdwara employees have come down to Joshimath, about 35 km from Hemkunt Sahib, and would wait for "things to brighten up".

The 'kapaat' (doors) of the holy shrine were shut after offering of 'ardaas' (holy prayers), the official added.

According to Shri Hemkunt Sahib Management Trust (SHSMT), Management has decided to close the holy shrine with immediate effect and asked staff to come down at Gurdwara Govind Dham, located lower at a height of 10,500 feet above sea level.

"It will be impossible to resume the pilgrimage this year," SHSMT Vice Chairman Narinder Jit Singh Bindra said.

The sealing of the Gurdwara with electric welding is underway, Bindra said. The entire process undertaken to keep all the food stock intact is likely to be completed in couple of days.

"We have instructed all the 70 odd staff members to come down at Gurdwara Govind Dham," he added.

All the staff members of the SHSMT along with 130 other employees from Gurdwara Govind Dham would be airlifted to the plains when the choppers will resume sorties in two days, Bindra said.

Notably, Hemkunt Sahib Gurdwara has emerged as an important centre of Sikh pilgrimage which is visited by thousands of devotees from all over the world every summer as per Bachitra Natak, the autobiographical account of the tenth Guru, Gobind Singh, it was at Hemkunt 'adorned with seven snow peaks' that he meditated in his previous birth.