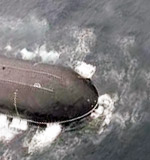 Defence Minister A K Antony is scheduled to introduce Russian made nuclear submarine, rechristened 'INS Chakra' to Indian Navy today in order to strengthen the vigilance and power of Indian navy.

The Russian-origin Akula II class Nerpa, will be commissioned today from Vishakhapatnam ship base.

With this induction of nuclear powered submarine, India will join the elite club of five powerful nations - US, UK, Russia, France and China - that hold nuclear submarines. India will be the sixth.

This is not the first time, India is experiencing nuclear submarine, as in 1988 Indian Navy has leased Charlie class nuclear Russian submarine, but for training purpose. The Indian navy officers and guards got training on it.

Now, this Nerpa submarine has been taken on lease from Russia for 10 years and would provide Navy the opportunity to train and operate such nuclear-powered vessels while India is developing it own indigenous nuclear submarine INS Arihant, likely to commission soon in the Indian Ocean.

For leasing Nerpa India and Russia had signed a deal of worth US$900-million in 2004.

INS Chakra is fully equipped with nuclear power including fuels and projecting missiles. It can run with a maximum speed of 30 knots, can dipped below to 600 meters in water and remain till 100 days with a crew of 73.