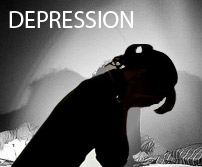 People suffering from depression tend to remain with negative thoughts or memories repeatedly, shows altered patterns of brain activity in comparison to the healthy individuals.

Some people have the nature to think of the broader categories of events instead of specific events, called overgeneral memory. Such individuals also possess a higher risk of developing depression.

These negative activities involve a network of brain regions known as default mode network or DMN. According to the earlier studies made using imaging technique, the DMN activates abnormally in case of people suffering from depression. However, the link between DMN activity and depressive ruminations was ambiguous, the journal Biological Psychiatry reports.

In this new report, Shuqiao Yao of Central South University in Hunan, China and colleagues calculated the functional connectivity of DMN in untreated young adults who were in first phase of major depression and healthy volunteers.

Each participant of the study had undergone a brain scan and completed tests in order to measure their levels of rumination and overgeneral memory, according to a Central South University statement.

"As we dig deeper in brain imaging studies, we are becoming increasingly interested in the activity of brain circuits rather than single brain regions," said John Krystal, editor of Biological Psychiatry.

"Although it is a more complicated process, studying brain circuits may provide greater insight into symptoms, such as depressive ruminations," added Krystal.